Other Books in Series

This is book number 4 in the The Stormlight Archive series. 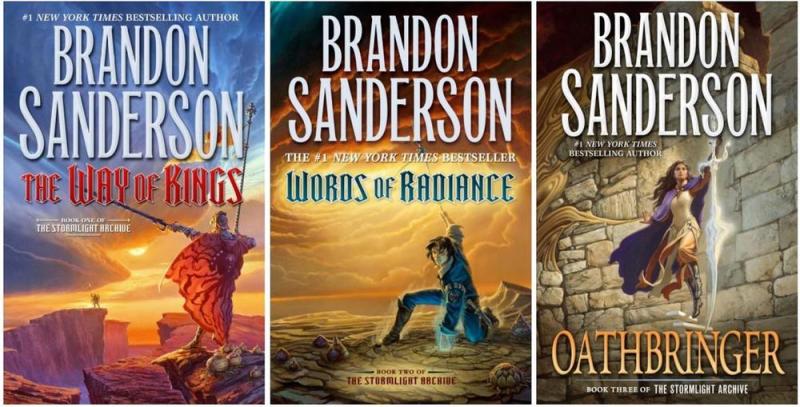 Pre-order the fourth book in The Stormlight Archive series from prolific fantasy author Brandon Sanderson and get a signed copy! Pre-orders must be pre-paid.

The Stormlight Archive saga continues in Rhythm of War, the eagerly awaited sequel to Brandon Sanderson's #1 New York Times bestselling Oathbringer, from an epic fantasy writer at the top of his game.

After forming a coalition of human resistance against the enemy invasion, Dalinar Kholin and his Knights Radiant have spent a year fighting a protracted, brutal war. Neither side has gained an advantage, and the threat of a betrayal by Dalinar’s crafty ally Taravangian looms over every strategic move.

Now, as new technological discoveries by Navani Kholin’s scholars begin to change the face of the war, the enemy prepares a bold and dangerous operation. The arms race that follows will challenge the very core of the Radiant ideals, and potentially reveal the secrets of the ancient tower that was once the heart of their strength.

At the same time that Kaladin Stormblessed must come to grips with his changing role within the Knights Radiant, his Windrunners face their own problem: As more and more deadly enemy Fused awaken to wage war, no more honorspren are willing to bond with humans to increase the number of Radiants. Adolin and Shallan must lead the coalition’s envoy to the honorspren stronghold of Lasting Integrity and either convince the spren to join the cause against the evil god Odium, or personally face the storm of failure.

Other Tor books by Brandon Sanderson

The Mistborn trilogy
Mistborn: The Final Empire
The Well of Ascension
The Hero of Ages

Mistborn: The Wax and Wayne series
Alloy of Law
Shadows of Self
Bands of Mourning

Other books by Brandon Sanderson

Brandon Sanderson grew up in Lincoln, Nebraska. He lives in Utah with his wife and children and teaches creative writing at Brigham Young University. He is the author of such bestsellers as the Mistborn® trilogy and its sequels, The Alloy of Law, Shadows of Self, and The Bands of Mourning; the Stormlight Archive novels The Way of Kings and Words of Radiance; and other novels, including The Rithmatist and Steelheart. In 2013, he won a Hugo Award for Best Novella for The Emperor's Soul, set in the world of his acclaimed first novel, Elantris. Additionally, he was chosen to complete Robert Jordan's Wheel of Time® sequence.

Praise for the Stormlight Archive

“Oathbringer is everything I expected it to be. Not only does it make good on the promises of the first two volumes, it elevates the Stormlight Archive to new heights of epic magic, exceptional worldbuilding, and satisfying action. With each new novel, Sanderson proves himself to be the true heir to Robert Jordan’s throne. He’s writing big, meaty, contemplative epic fantasy, and showing no signs of slowing down.”—B&N Sci-Fi and Fantasy Blog on Oathbringer

“Classic Sanderson, with multiple story lines and unexpected twists and turns . . . Successfully balances introducing new elements and satisfactorily resolving some threads, leaving fans to eagerly await the next in the series.”—Publishers Weekly on Oathbringer

“Excellent . . . cranks up the level of intrigue to dizzying extremes…Sanderson’s experiment is working, and he gets better with every book. The journey will be worth it. Yes, you should buy this book. Yes, this is a series worth following to the end.”—Tor.com on Words of Radiance


“Absolutely revels in its fantasy world, one of actual gods, bizarre magic, knights with superpowers, spirits and sorcery, monsters, demons, and magic sword called Shardblades. It embraces the fantastic, and does so with an astonishing amount of creativity . . . Words of Radiance is a must-read.”—io9 on Words of Radiance

“Sanderson is a master . . . Fans and lovers of epic fantasy will find the ending satisfying, yet will eagerly await the next volume.”—Library Journal on The Way of Kings

“Epic in every sense.”—The Guardian on The Way of Kings

“Sanderson is a master of many aspects of the fantasy genre: epic world-building, coherent systems of magic and unforgettable character development. All those are in peak form in his masterwork, The Way of Kings.”—Paste Magazine, “The 50 Best Fantasy Books of the 21st Century (So Far)”

“Brandon Sanderson’s reputation is finally as big as his novels.”—The New York Times on Words of Radiance