City of the Plague God (Hardcover) 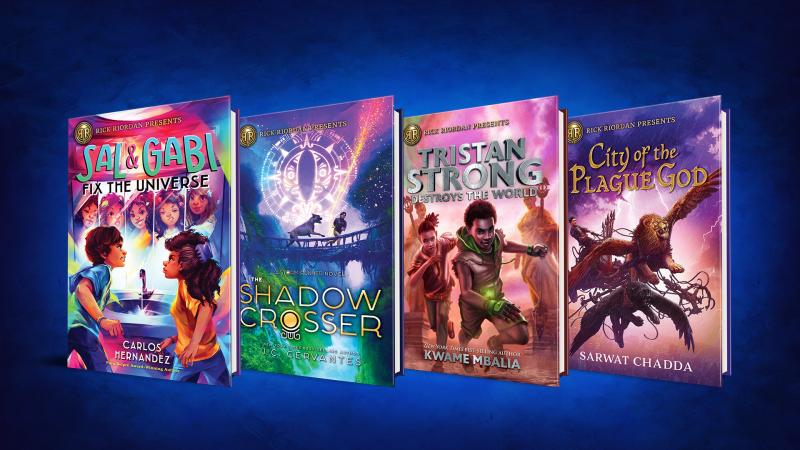 Pre-order the first in the next series from Rick Riordan presents, based in Mesopotamian mythology, and get a signed copy! Pre-orders must be prepaid.

Best-selling author Rick Riordan presents CITY OF THE PLAGUE GOD, an adventure based on ancient Mesopotamian mythology written by Sarwat Chadda, author of the Ash Mistry series.
"An epic worthy of Gilgamesh. Chadda brings attention to the less well-recognized mythology of ancient Mesopotamia with engaging humor and wit."--Kirkus Reviews
Thirteen-year-old Sik wants a simple life going to school and helping at his parents' deli in the evenings. But all that is blown to smithereens when Nergal comes looking for him, thinking that Sik holds the secret to eternal life.Turns out Sik is immortal but doesn't know it, and that's about to get him and the entire city into deep, deep trouble.
Sik's not in this alone. He's got Belet, the adopted daughter of Ishtar, the goddess of love and war, on his side, and a former hero named Gilgamesh, who has taken up gardening in Central Park. Now all they have to do is retrieve the Flower of Immortality to save Manhattan from being wiped out by disease. To succeed, they'll have to conquer sly demons, treacherous gods, and their own darkest nightmares.
"Featuring gods and goddesses, and importantly, Muslim heroes, this #OwnVoices tale eerily echoes our pandemic presents; but readers will find escape in the entertaining balance of an apocalyptic setting with irreverent humor."--School Library Journal

Sarwat Chadda, a first generation Muslim immigrant, has spent a lifetime integrating the best of his family's heritage with the country of his birth. There have been tensions as well as celebrations, but he wouldn't wish it any other way. As a lifelong gamer he decided to embrace his passion for over-the-top adventure stories by swapping a career in engineering for a new one as a writer. That resulted in his first novel, Devil's Kiss, back in 2009. Since then he has been published in a dozen languages, writing comic books, TV shows, and novels such as the award-winning Indian mythology-inspired Ash Mistry series and the epic high-fantasy Shadow Magic trilogy (as Joshua Khan). While he's traveled far and wide, including Africa, the Middle East, and Asia, he's most at home in London, where he lives with his wife, two more-or-less grown-up daughters, and an aloof cat. Feel free to drop him a line @sarwatchadda.

"This is a lush read with high appeal, full of apocalyptic drama, fight scenes, and stomach-turning descriptions of Neural and his band of demons, balanced with Sik's dry humor and a cast of quirky, vivid characters."—School Library Journal

"An epic adventure worthy of Gilgamesh. Chadda brings attention to the less well-recognized mythology of ancient Mesopotamia with engaging humor and wit."—Kirkus Reviews

*"Shadow Magic is a fast-paced read full of mystery, magic, misdirection, giant bats, and zombies. The characters are compelling, and the world is imaginative and well-crafted. Middle grade fantasy readers will find this book riveting and look for a sequel."—School Library Connection (starred review)