This ticket bundle includes 1 ticket for the Epic Reads Meet-up and 1 copy of The Queen's Rising.

Grave Mercy meets Red Queen in this epic debut fantasy, inspired by Renaissance France, about an outcast who finds herself bound to a disgraced lord and entangled in his plot to overthrow the current king.

Brienna desires only two things: to master her passion and to be chosen by a patron. Growing up in Valenia at the renowned Magnalia House should have prepared her. While some are born with a talent for one of the five passions--art, music, dramatics, wit, and knowledge--Brienna struggled to find hers until she chose knowledge. However, Brienna's greatest fear comes true--she is left without a patron.

Months later, her life takes an unexpected turn when a disgraced lord offers her patronage. Suspicious of his intent, she reluctantly accepts. But there is much more to his story, for there is a dangerous plot to overthrow the king of Maevana--the rival kingdom of Valenia--and restore the rightful queen, and her magic, to the throne. And others are involved--some closer to Brienna than she realizes.

And now, with war brewing, Brienna must choose which side she will remain loyal to: passion or blood. 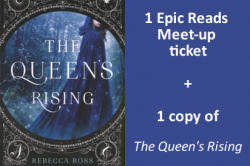