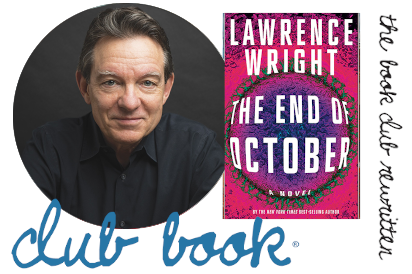 Lawrence Wright is an acclaimed journalist, screenwriter and novelist. His impressive ten nonfiction titles to date include The Looming Tower: Al-Qaeda and the Road to 9/11, winner of the Pulitzer Prize for General Nonfiction. Wright also executive produced a 10-episode miniseries adapted from this 2006 exposé (starring Alec Baldwin and Jeff Daniels) for Hulu in 2018. His explosive follow-up, Going Clear: Scientology, Hollywood, & the Prison of Belief, likewise received the screen treatment. Wright co-produced a 2015 film adaptation that won three Emmys (including for Best Documentary), along with the prestigious Peabody Award. Wright’s recent fiction includes the eerily prescient novel The End of October, a 2020 medical thriller about a virus that originates in Asia before ravaging the globe. According to The New York Times Book Review, “Wright applies the magisterial force of his reporting skills, spinning a novel of pestilence, war and social collapse that – given the current pandemic – cuts exceedingly close to the bone.” Wright’s timely bestseller will be reissued in paperback on April 6.

The End of October: A novel (Paperback)

The End of October: A novel (Hardcover)